TOURMALINE THE GEMSTONE OF MANY COLOURS 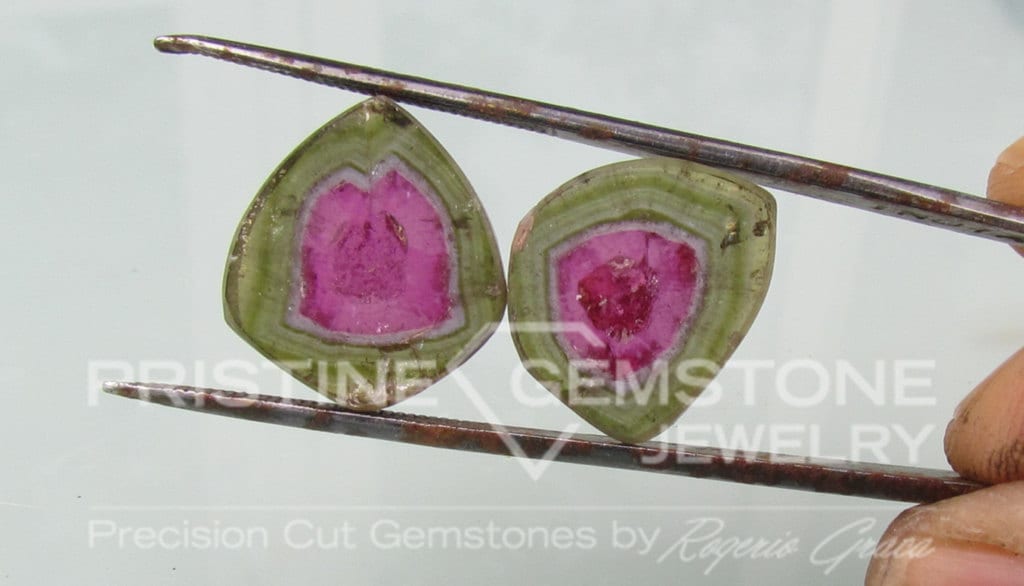 Tourmaline is a boron silicate mineral compounded with aluminum, iron, magnesium and a few other elements. Its name comes from a Sinhalese word which means a “stone of mixed colors”.

If you like a variety of colors or an unusual color in gemstones, tourmalines are good candidates for offering a wide range of colors. In fact, there are many varieties of tourmalines based on their color:

– Green is the most common color among the tourmalines, and it is available in the widest range of shades.  Green is also the most affordable of all the tourmaline colors.

– Rubelite is usually red but the presence of a secondary color is very common. This is one of the few varieties of the tourmaline in which radiation may have been used to improve its color. The treatment is safe and stable. Rubelites are usually more expensive than green tourmalines.

– Indicolite tourmaline, as the name implies, are blue although a secondary green color is usually present to a certain degree. Indicolites can present another secondary color such as grey, which is detrimental to the value of the indicolite. The pure blue indicolite commands the highest price.  Indicolite are not as common as the greenish blue colors of many tourmalines.

– Paraiba tourmaline (determined based on the copper content and color), first discovered in Brazil 1987, are by far the most expensive of the tourmalines. They have been in the spotlight since their introduction to the gemstone market.

Initially the Paraiba tourmaline name was used primarily for tourmalines from the Batalha mine in Brazil; the only place in the world producing the most vibrant tourmaline ever found. However, with the more recent discovery of tourmalines in Mozambique and Nigeria, which can also present with the same copper content, the name “Paraiba” has been extended to these tourmalines as well after much controversy and lawsuits.

There is a range of colors for the Paraiba tourmaline but the turquoise neon color tourmalines are the finest and most prized tourmalines. The finest Paraiba tourmaline pieces over 1ct can cost as much as $5000/ct (wholesale).  The price per carat increases exponentially as the carat weight increases over 2cts.  Prices for Paraiba tourmalines can vary dramatically depending on the color, clarity, carat, and origin. Expect to pay a premium for the Brazilian Paraiba as they tend to be the more vibrant neon quality material.

Most tourmalines come from Africa and Brazil. The main countries in Africa that produce tourmalines are Tanzania, Madagascar, Nigeria, Namibia, and Mozambique. Other sources of tourmalines are Australia, Sri Lanka, the U.S., Afghanistan, and Russia.

Prices for tourmalines are based on color, clarity, size, cut, variety, and the origin; although expect to pay a premium for certain shapes and unusual colors.

The Importance of the Cut in Tourmalines

Most tourmalines present very strong pleochroism, especially in the medium dark material. Pleochroism is an optical phenomenon in which a crystal appears to present different colors when viewed from different angles. In tourmalines the “C” axis (length) of the gemstone has a much darker secondary color than the lighter and more appealing color seen perpendicular to the “C” axis.

Tourmalines are beautiful gemstones, relatively durable, and affordable. They are on top of my list as one of the most exciting gemstones. Anyone who is particular about color should consider a tourmaline as a great option since it comes in almost every single color.

Normally tourmalines don’t undergo any type of treatment although some of the rubelites have been irradiated to improve their color. Some tourmalines may receive heat treatment in order to subdue some of the secondary colors. Not all tourmalines respond well to heat since only certain trace minerals may benefit from it.

Overall most tourmalines are relatively clean or free of inclusions and they come in a wide array of colors. Indeed the most beautiful colors in the gemstone kingdom are found in tourmalines.

Visit our Gemstone Collection to see some of the tourmalines we offer as well as some of our other loose gemstones.

For more information on this special type of gemstone, please visit the Gemological Institute of America’s Gem Encyclopedia article on Tourmalines

Blog prepared by: Rogerio Graca, professional gem cutter/lapidary and supplier of gemstones for 24 years.  Read All About Us!